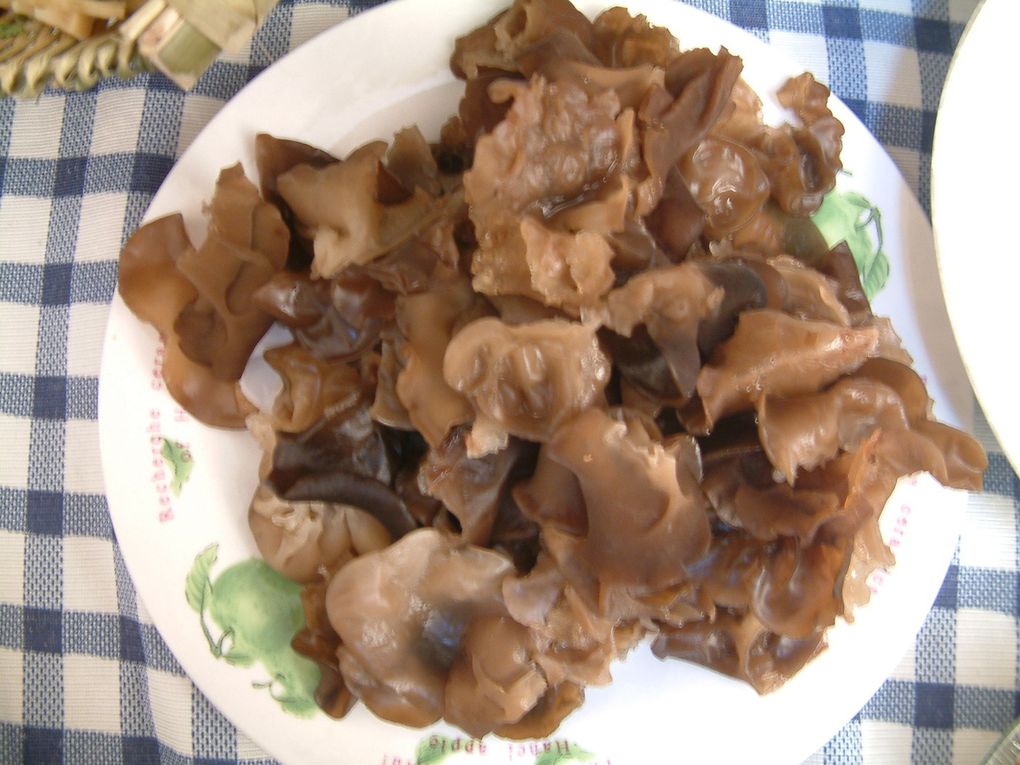 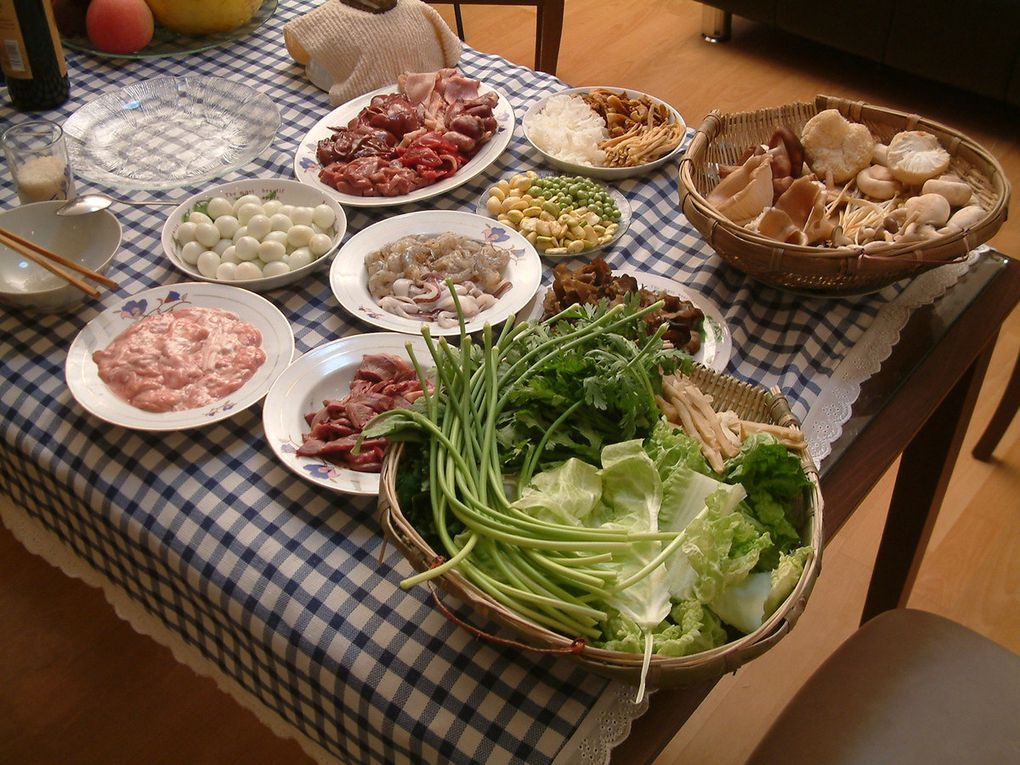 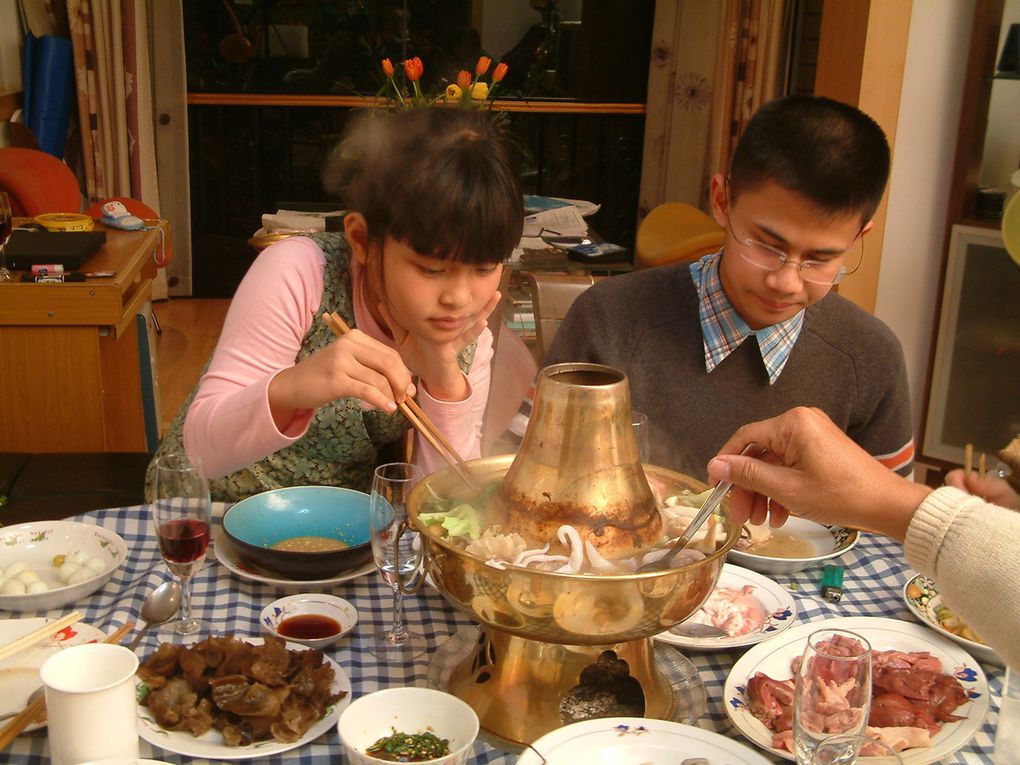 Our family is of Chinese descent so we celebrate both Chinese and Khmer New Year. The tradition is to prepare the Hot Pot or Huo Guo that we call Culao in our family as my great grandfather probably landed on the shores of South Vietnam when fleeing China before establishing himself in Thnaot, in Takeo province and marrying my Khmer great grandmother. the ingredients that go into the Culao are as varied as our imagination can be.

The key to good Culao is to simmer the soup for hours before we transfer to the fire pot and arrange all the ingredients in a fashionable manner, layer by layer. The fibrous vegetable like the cabbage, kana or kale should be put at the bottom of the pot while the more fragile and easy to cook leaves should be put on the top layer.

Below is the recipe from "The Cooking of China", Life Magazine (1968). Dad says he has yet to find a better description of how we prepare this.

Put 2 quarts (about 2 liters) of cold water in a pot. Add the chicken carcass and bone marrow and bring the water to a boil. Once it boils, lower the heat and add the onion, carrot and celery. Let the broth simmer for 2-3 hours. Skim the foam regularly to keep the broth clear. Add the salt, pepper.

Note : in our family, we lay the "hard" vegetables into the stock, cover the pot and allow them to lightly cook. Then each guest dips the fish, meat and seafood as described above. The fragile vegetables will be also eaten piece by piece like the meat. Guests then fish out what they like and serve themselves.

For your creativity, I am listing below other ingredients you may use:

More about the Chrysanthemum fire pot

The fire pot is a very special utensil; it comes in many sizes and shapes, and is generally made of brass, aluminum, or stainless steel. Most of them measure about 15 or 16 inches in diameter and have a source of heat in the center of it for cooking the soup and the other ingredients. Old-fashioned ones are made of brass and feature a metal chimney in the center. They are shaped like a big hollow donut that sits on a grate with an opening in the bottom for the removal of ashes. Burning charcoal is fed into the chimney of the fire pot which is also the inner wall of the donut. Hot soup is placed in this donut that surrounds the chimney. When the soup is boiling, ingredients are added to it for cooking. A cover that fits around the chimney and over the donut is used to facilitate the boiling of the soup, and to conserve energy.

The Mandarin term for serving fire pot for dinner is chi huo guo and in Cantonese, it is ju hua huo guo. The name originates from the Chinese practice of sprinkling fresh white chrysanthemum petals over the food served in the fire pot. This imparts refreshing flavor to the soup.

According to some, the name Chrysanthemum Fire Pot may come from an old-style fire pot which had eight compartments in the donut-shaped vessel. After surrounding the fire pot with dishes of raw and assorted sliced meats, fresh eggs in the shell, and raw vegetables, the meal was ready for cooking. With eight people sitting around a table, each could have their own private cooking compartment in which they could cook their own combination of meat and vegetables; they could even poach an egg in their soup, should they so desire.